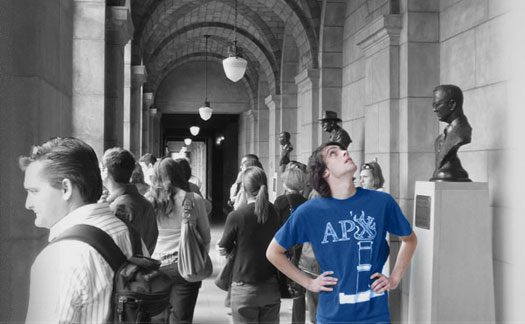 Alpha Rho Chi (APX) is the national fraternity for architecture and the allied arts. Our organization unites men and women for the purpose of fellowship and lifelong friendships and our mutual interest in professional development. This is exemplified by the fraternity’s motto: Fidelitas, Amor et Artes or “Fidelity and Love of the Arts.”

A CENTURY OF HISTORY

Alpha Rho Chi celebrated its centennial in 2014. Click the timeline below for highlights from over 100 years of APX's history. 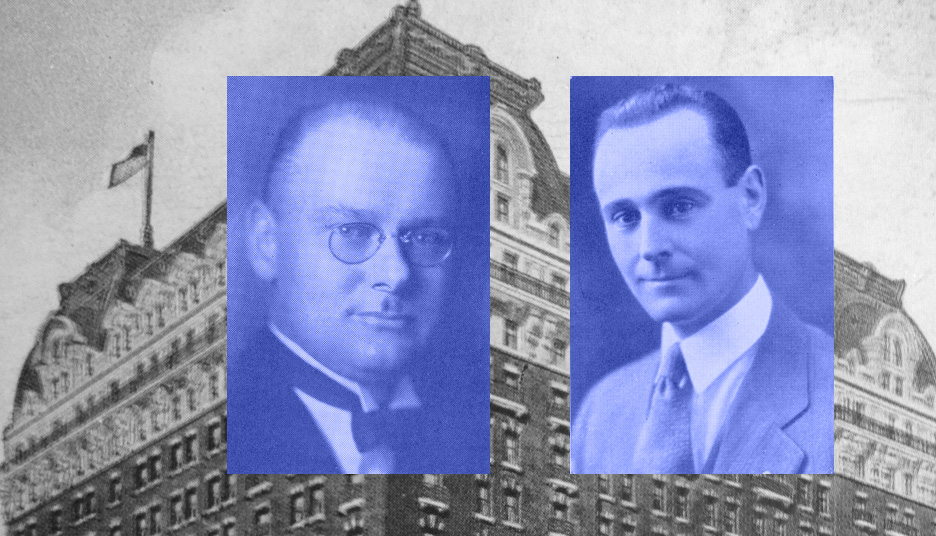 After corresponding with other schools of architecture, the two societies first made contact in February 1914. Arcus and Sigma Upsilon soon agreed to hold a conference at the Hotel Sherman in Chicago. On April 11 their respective delegates, Leo M. Bauer and Chandler C. Cohagen, agreed on the name “Alpha Rho Chi,” founding the new fraternity. 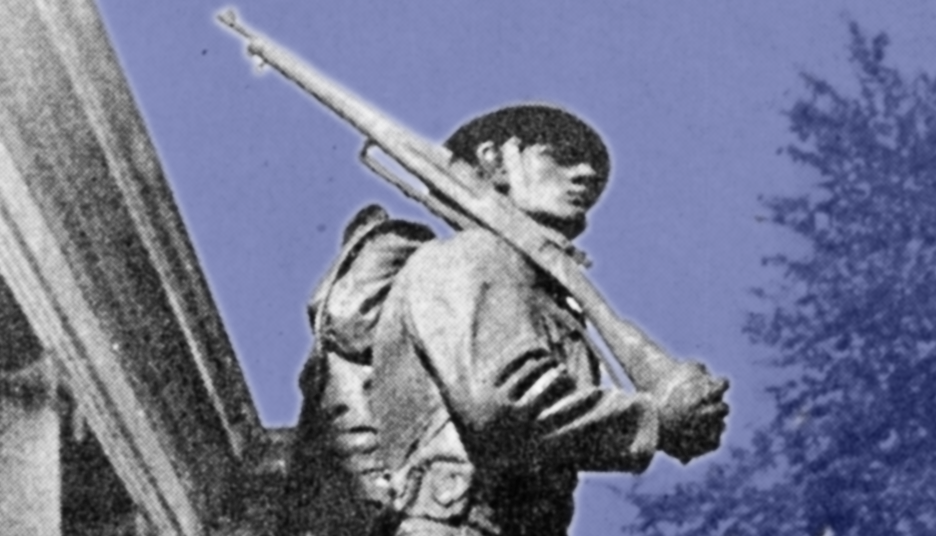 By 1916, APX had absorbed members of local fraternities at Ohio State and the Univ. of Minnesota as new chapters. However, with the onset of a World War, the majority of brothers would enter military service. In 1918 and 1919, most chapters reported closing their houses and holding meetings with a handful of members.

By Fall 1918, 100% of Demetrios Chapter at Ohio State was in service. Returning veterans would start to reconstitute the chapter in the spring of 1919. One of the chapter’s veterans, Martin Pat Coady, would later be the model for the Doughboy Statue that stood on campus for a half century.

Even the Grand Council was not immune. With WGA Clair Ditchy serving in France and WGS Samuel Albee’s unexpected death in May, WGE George McConkey would serve in all three offices for the remainder of 1918. 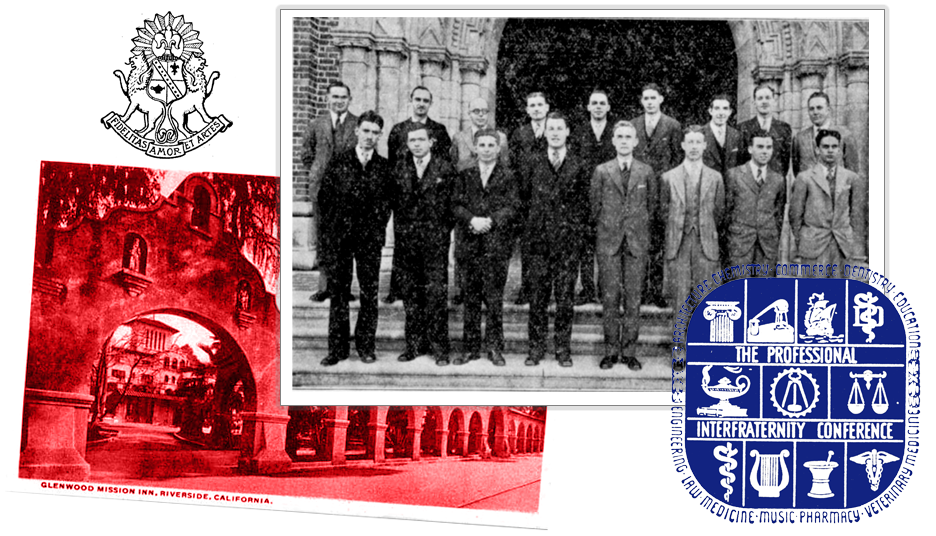 By 1926, Alpha Rho Chi had grown to 10 chapters. By custom, the fraternity’s National Convention would rotate among the active chapters in order of founding; however, cost and distance kept the Andronicus Chapter at USC from hosting the Convention until December 1928.

With travel costs to Los Angeles estimated at $14 per member, the host chapter was determined make the most of the trip. When the Convention wasn’t holding business sessions on campus, they traveled to the beach for a formal dinner dance, rented Packards to visit the Mission Inn in Riverside as part of a 200-mile excursion, visited alumni at work in movie studios in Burbank, and watched the Rose Bowl football game.

Despite all the sightseeing, the convention delegates managed to conduct business. The Convention approved APX becoming a founding member of the Professional Interfraternity Conference (which merged to become the Professional Fraternity Association in 1977), appointed a committee to consider revising the coat of arms, and empowered WGS Verle Annis to investigate creating what would become the APX Medal. 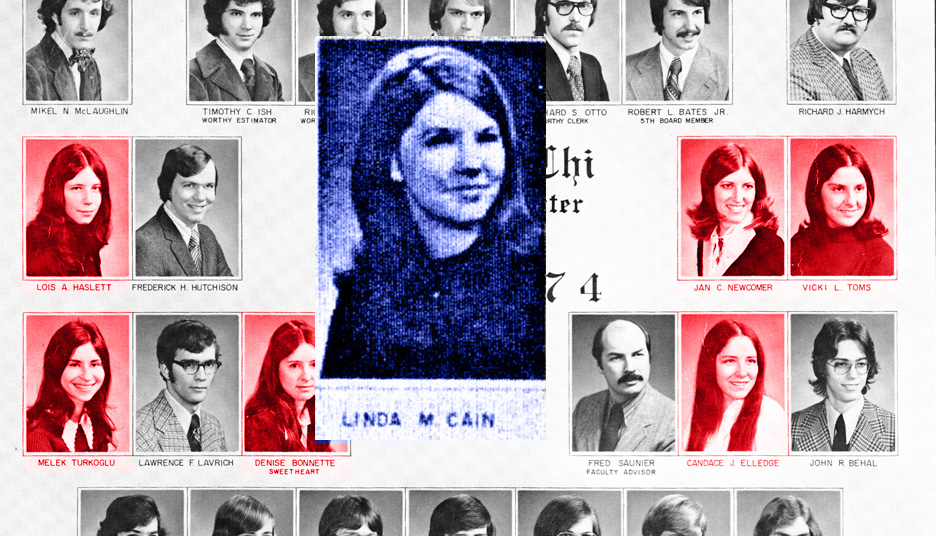 In 1967, Iktinos Chapter at Michigan extended a bid to Linda Cain to join Alpha Rho Chi. She would be the first woman initiated as a brother of the fraternity. Despite the controversy, other  chapters would follow Iktinos’ lead over the next decade and all APX chapters became co-ed by the early 1980s. Linda (now Linda Lilly) would go on to become president of the Iktinos Alumni Association.

All members of Alpha Rho Chi are considered “brothers,” regardless of gender. In part, this avoids confusion with “little sister” organizations that were once affiliated with some chapters. More significantly, the title of brother represents women’s equal share in the Ritual, traditions, and history of APX. 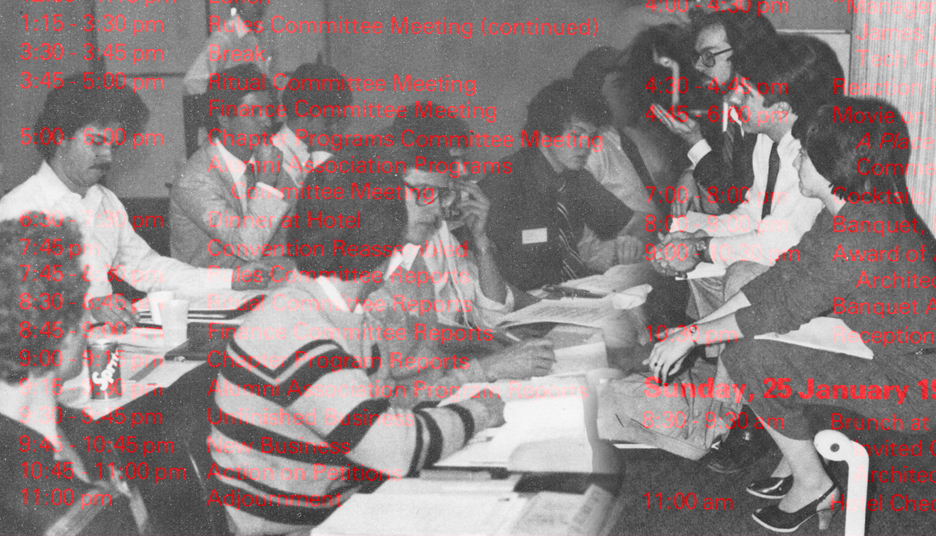 With “The New Horizon,” as its theme, the 37th National Convention in Houston was probably APX’s most ambitious. Dean Charles Burchard, the noted educator who was appointed as WGA two years earlier, conceived of the agenda to rededicate Alpha Rho Chi towards its future of its organization and the profession.

The delegation was tasked with major constitutional changes. In committee meetings and sessions lasting until 2:00 am, the Convention expanded the Grand Council from three members to five, examined APX’s finances, revised the APX Gold and Silver Medals, and changed Convention to an annual event.

The ambition of the marathon business session was matched by the professional program of speakers and panels. The highlight of the program was the presentation of the APX Gold Medal to I.M. Pei, who was installed as the fraternity’s seventh Master Architect at the Convention’s banquet. 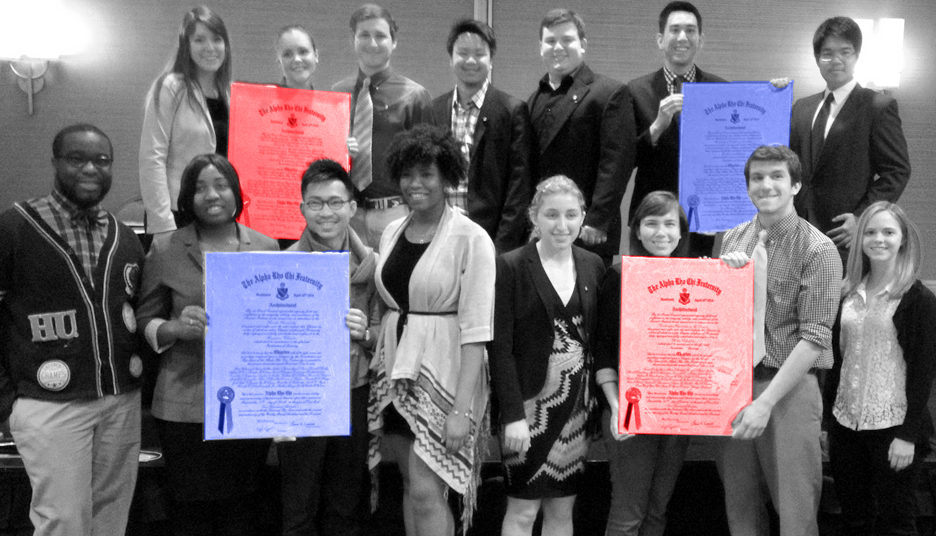 The progress of Alpha Rho Chi has always depended on the initiative of students who share the vision of our professional fraternity. For much of that history, many chapters’ founding stories began with chance encounters with brothers cultivated through patient correspondence. The Internet and 21st Century communications have accelerated that process.

Between 2004 and 2014, Alpha Rho Chi doubled in size – from 14 active chapters to 27. The fraternity presented four new chapters their charters at its 2014 National Convention alone. With that growth, the network effect is being experienced across our national fraternity.

Student membership in APX provides access to peer support from upperclassmen. With the help of older and wiser members, students can gain critical insight into the expectations of their upcoming years of study. This continues after graduation.

The association with the alumni and faculty is a major benefit of membership. These professionals are able to lend their first-hand information and contemporary experience to assist in defining academic, personal and career objectives. Office and construction site visits, resume workshops, and personal connections help bridge the gap between school and the profession. 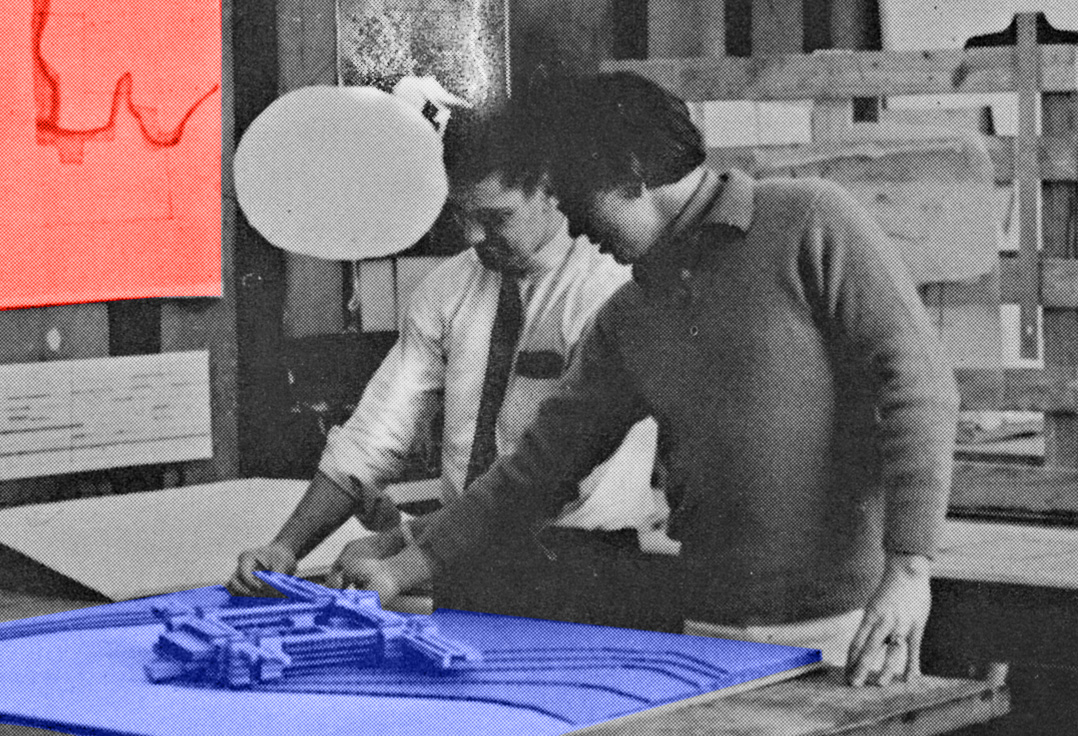 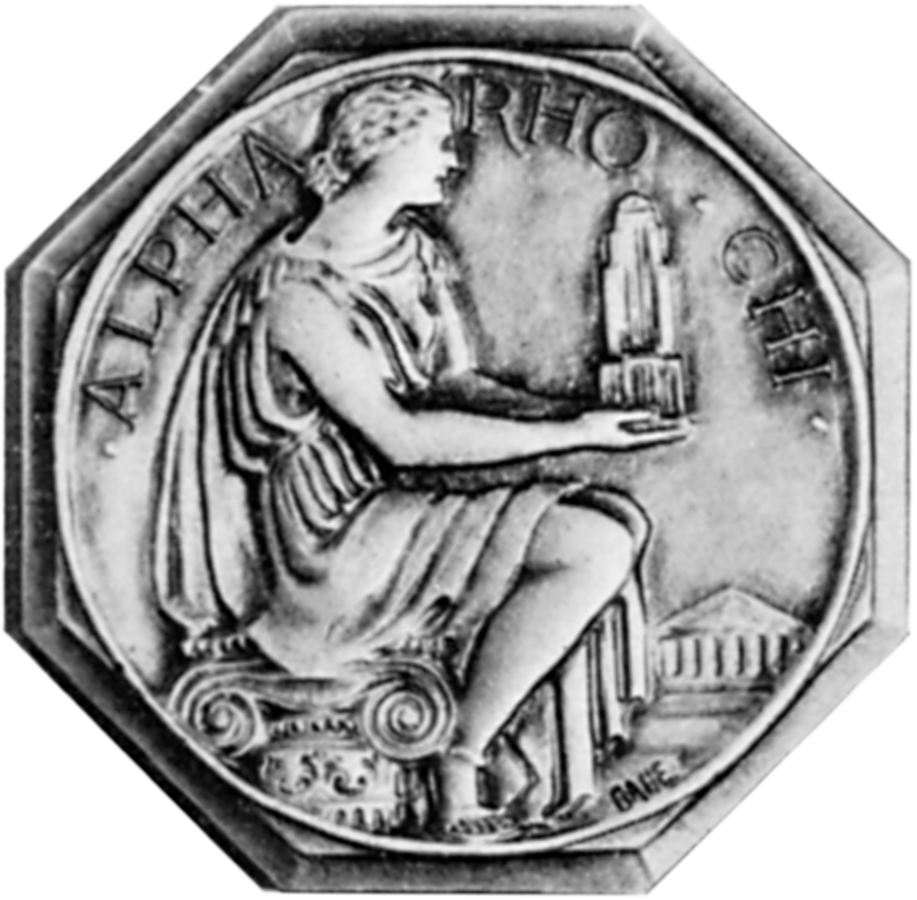 Since 1931, the Alpha Rho Chi Medal has recognized graduating seniors from schools of architecture demonstrating leadership, service, and the promise of professional merit. The medal is offered annually at over 100 accredited school of architecture in the United States and Canada, and is awarded based on the faculty’s selection of the student best exemplifying these qualities.

The medal, designed by noted sculptor Merrell Gage, is cast in bronze and features a seated Athena holding a skyscraper.

Alpha Rho Chi believes that leaders are vital to the future of the profession. Members develop those skills with the help of their fellow brothers. Volunteer members run our fraternity at every level — within our chapters and up through our national organization.

Our chapters are laboratories of collective organization. Whether it’s participating in the decision-making process of the chapter meeting, organizing a project, or serving as the chapter’s Worthy Architect (president), students test ideas and acquire experiences not replicated in the studio. Working together helps prepare members for the demands and expectations of the business world.

These opportunities continue after graduation. The Grand Council of the national fraternity and its appointed officers are alumni volunteers. They not only share their fraternal and business knowledge; they also gain additional experience to take back into their careers. 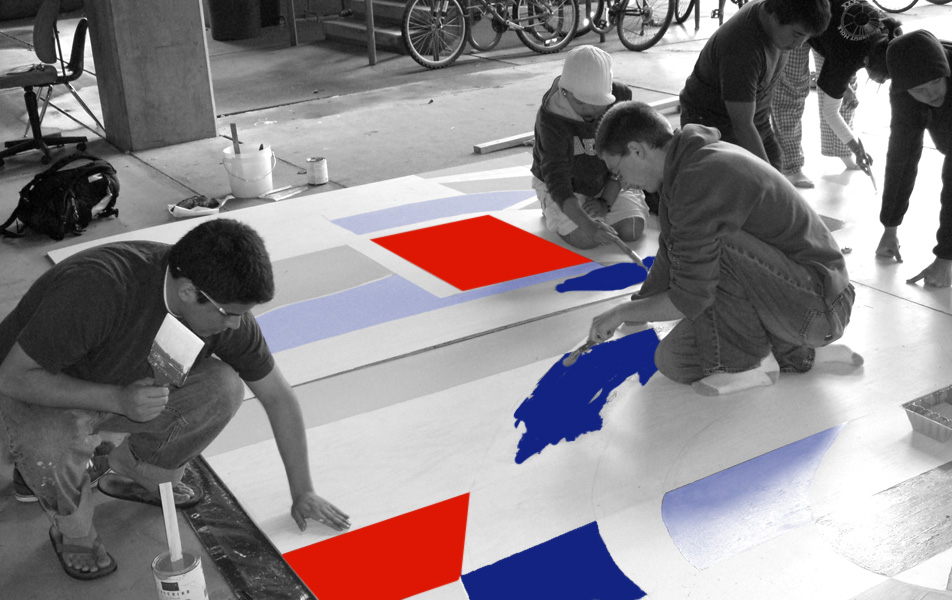 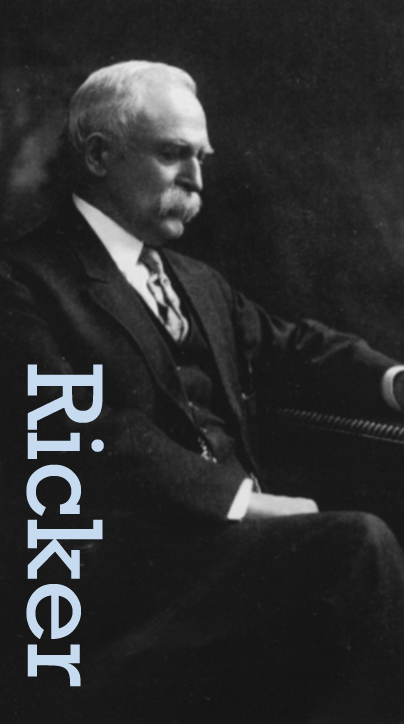 (b. 1843 – d. 1924) A pioneer in architectural education, Nathan Clifford Ricker received his graduation certificate from the University of Illinois (then Illinois Industrial University) on March 12, 1873, becoming the first graduate of any architectural program in the United States. Ricker would then chair the Department of Architecture at the University of Illinois from 1873 to 1910, becoming dean of the College of Engineering in 1878. In addition to establishing the architecture curriculum at Illinois, he designed five major campus buildings and numerous smaller projects as university architect.

Dr. Ricker was instrumental in the founding of our fraternity, offering faculty guidance, advice, and encouragement in its earliest days – including suggesting the very name “Alpha Rho Chi,” derived from the first three letters of the Greek word for architecture: αρχιτεκτονικu03ae.

In his honor, the fraternity established the title of Master Architect in 1914. 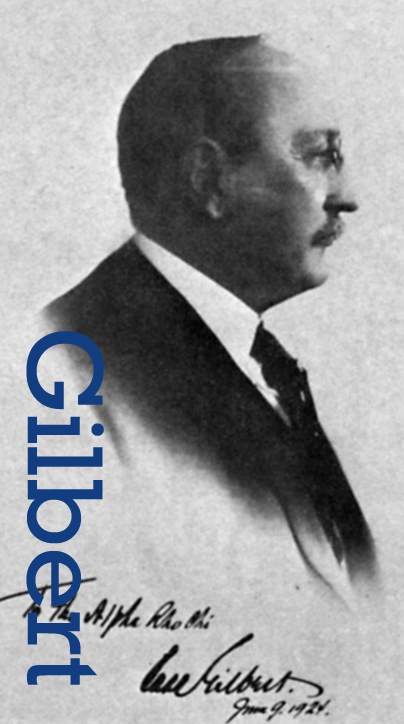 (b. 1849 – d. 1934) Beginning his architecture career in St. Paul in 1893 and soon moving to New York 1898, Cass Gilbert was one of the most prominent architects of his era, serving as president of the American Institute of Architects in 1908-09. His work included multiple state capitols and the Woolworth Building. At 57 stories, Woolworth Building was the tallest building on Earth when constructed in 1913.

Gilbert was initiated as Master Architect of Alpha Rho Chi in 1924, sponsored by Mnesicles Chapter. 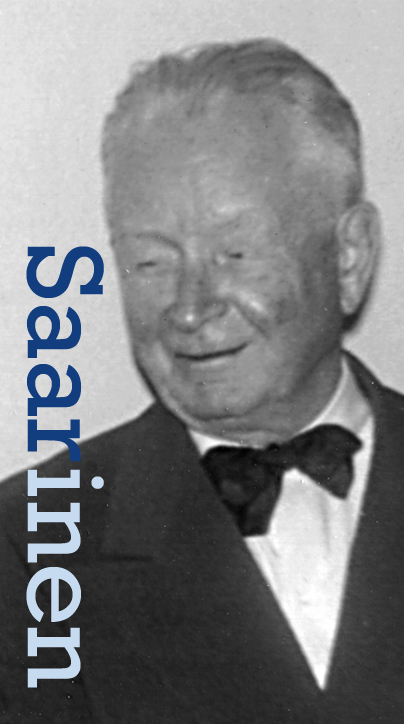 (b. 1873 – d. 1950) Born in Finland, Saarinen designed the Finnish pavilion for the 1900 World’s Fair and the Helsinki Railway Station in 1904. Shortly after submitting his influential entry in 1922 Chicago Tribune Tower competition, he emigrated to the United States. Saarinen became a visiting professor at the University of Michigan before being appointed president of the Cranbrook Academy of Art in 1932 and designing its campus. Saarinen was initiated as Master Architect in 1942 by Iktinos Chapter. 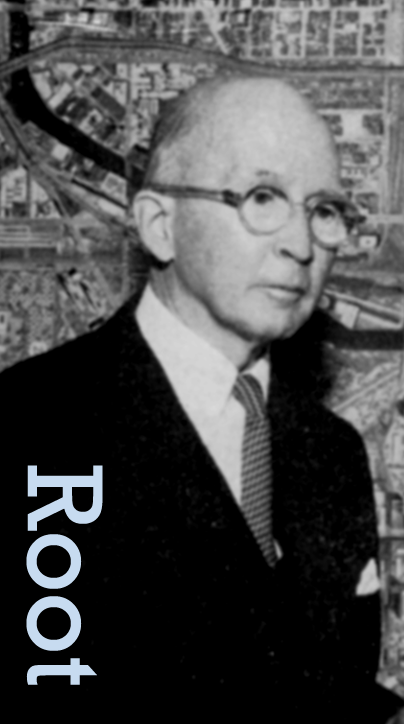 (b. 1873 – d. 1950) John Wellborn Root was an architect and civic leader. He inherited his love for architecture from his father, also named John Wellborn Root. Root would form a partnership with John Holabird in 1928, creating one of the county’s largest architectural firms, Holabird & Root. In 1945 Root became a leading member of the Chicago Planning Commission. The title of Master Architect was bestowed on Brother Root in Chicago in 1951. 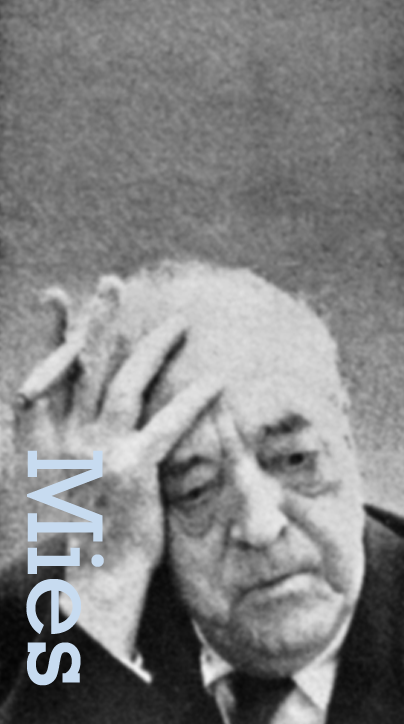 (b. 1886 – d. 1969) Growing from the craft tradition of his father’s stonemason workshop, Mies would become one of the founders of modern architecture. His work in the 1920s established an “open plan” vision of modern architecture, culminating in the Barcelona Pavilion of 1929. In 1938, Mies accepted an invitation from the Illinois Institute of Technology to become Director of Architecture and design its campus and buildings, including Crown Hall. After WWII, numerous commissions gave Mies unique opportunities to realize large scale projects. His high rise prototypes, conceived as steel skeletons with structurally articulated facades, were realized in his Chicago Lake Shore Drive apartments (1948-1951). Mies was installed as Master Architect by Andronicus Chapter in 1966. 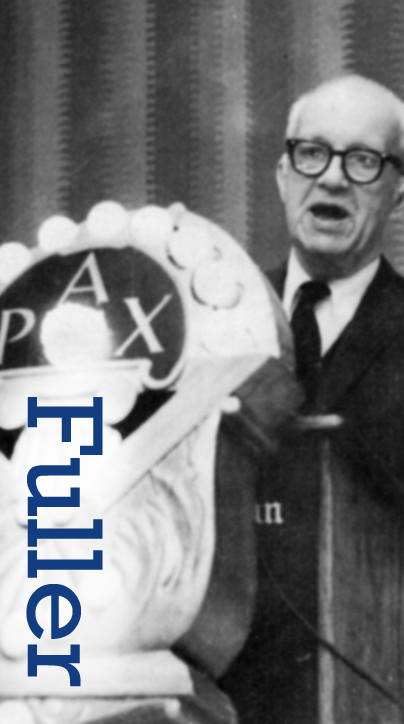 (b. 1895 – d. 1983) Buckminster Fuller was inventor, author, architect, and prophet of the possible who looked to the future with great optimism. His belief that a design revolution could address the world’s problems led him to dedicate much of his time to teaching and connecting with college students. A faculty member of Mnesicles Chapter since 1954, Brother Fuller received the title of Master Architect in 1970. 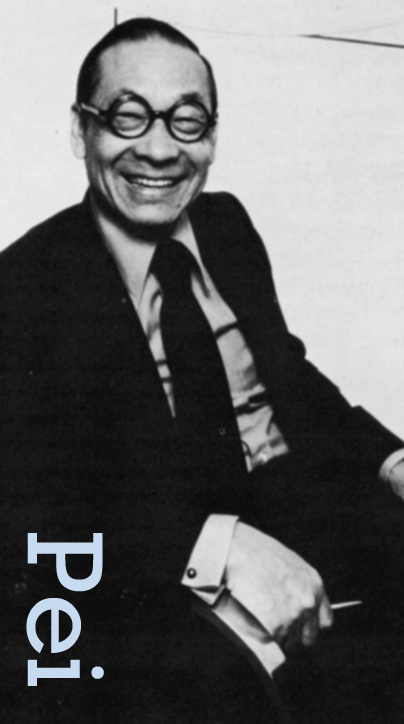 (b. 1917) A leading modern architect of the late 20th century, Ieoh Ming Pei has received many awards for a lifetime of work including the AIA Gold Medal and Pritzker Prize. Among his earliest awards was the Alpha Rho Chi Bronze Medal he earned graduating from Harvard in 1945. A founding partner of Pei, Cobb Freed & Partners, Pei retired from full time practice in 1990.

The title of Master Architect was conferred upon Pei at APX’s 37th National Convention in 1981. He is the only person to be named Master Architect of Alpha Rho Chi without being a member of the fraternity. 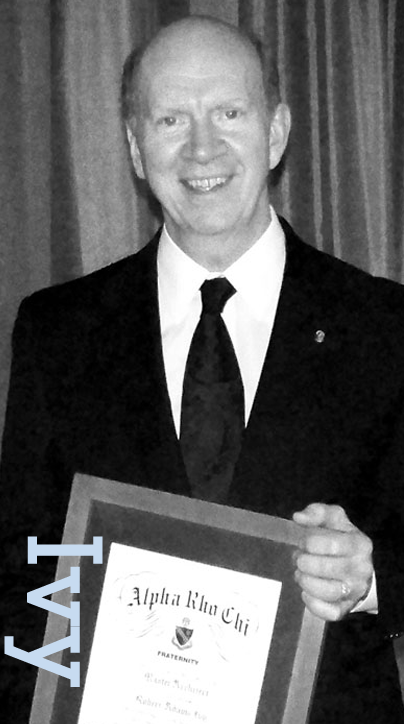 Robert Adams Ivy, Jr., FAIA is a spokesman for the profession of architecture and currently serves as EVP/Chief Executive Officer of the American Institute of Architects.

A principal in his architectural practice for 15 years, his passion and talent as a communicator led him to pursue a concurrent career as a critic and writer. His 1992 book, Fay Jones: The Architecture of E. Fay Jones, FAIA received the Art Library Society of North America’s highest honor, the George Wittenborn Award.

From 1996 to 2010, Ivy was editor-in-chief of Architectural Record and oversaw the production of multiple publications, including Engineering News-Record (ENR), as editorial director of McGraw Hill Construction. In 2009, Ivy received the Crain Award from American Business Media for his contributions to business publishing. Brother Ivy was initiated as an honorary member of Imhotep Chapter in 2007, and was installed as Master Architect in 2010. 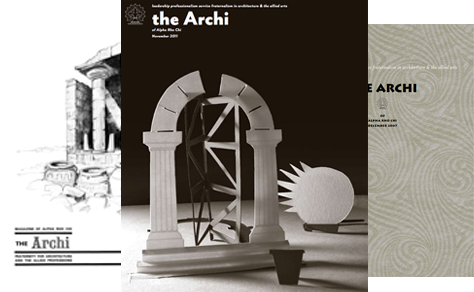 The fraternity’s official magazine, The Archi,  is distributed to all members of the fraternity and to the deans and libraries of all schools which have accredited architecture programs. A sister publication, The Alpha Rho Chi Letter, serves as the fraternity’s newsletter.

The Alpha Rho Chi Foundation was established in 1989 to advance education and research directed toward the discovery, promotion, furtherance and dissemination of knowledge related to architecture and the allied arts.

To that end, the Foundation provides scholarships for Alpha Rho Chi members, sponsors professional programs at many levels, underwrites scholarly publications and the Alpha Rho Chi Medal Program, and promotes new and innovative educational opportunities for students in architecture and the allied arts. Gifts to the Alpha Rho Chi Foundation are tax-deductible.

Learn how you can give 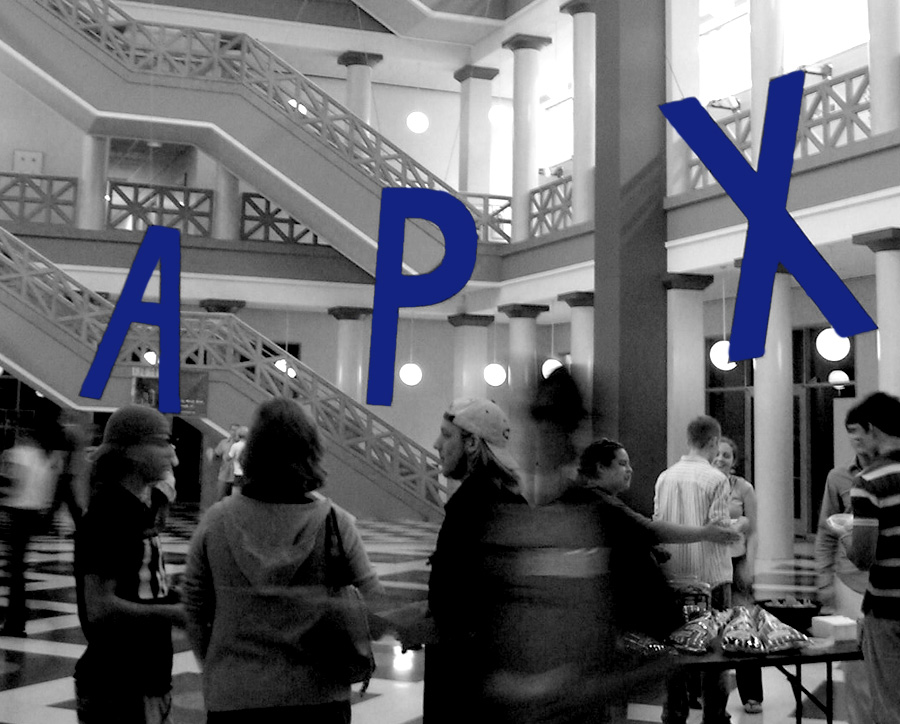